It’s been a while since my last coaching letter due to some technical problems with sending it out. A lot of things have happened lately in my part of the world. The horrific events in Norway leaving over 80 people dead chocked us all. The consolation of it all is that a deranged minds plans seldom pans out. Instead of separating minorities from society people have come together as never before – hundreds of thousands of them symbolically holding hands in Oslo.

Let’s hope that will catch on and spread across the world like wildfire. It’s time to see that our future challenges will take all of us to overcome. That a difference of opinion is a good thing and that thoughts are only thoughts. As soon as we get stuck in thinking that it must be right ”because I thought it” we will have a hard time feeling as happy as was our intention when we took our thinking seriously.

Which is a good segway into my own thoughts this month, because they’re all about a profound principle that can make all the difference in the world. Not only for you personally, but to anyone that you have the privilege to touch – at the workplace, at home or anywhere else. Curious? Then scroll down, read and…

" If you are distressed by anything external, the pain is not due to the thing itself but to your own estimate of it; and this you have the power to revoke at any moment "

I get quite a few emails from people who, for one reason or another, feel like failures in life. Some of them are depressed because they haven’t accomplished what they think they should by now. Others because they just don’t feel as happy as they think they should now that they have accomplished everything they wanted. Losing weight, making money, having a great spouse, being respected…

They all have plenty of different reasons and engaging stories explaining why being a success or feeling successful has eluded them. However, as far as I can tell they all have one common denominator: They have set up very strict rules for life having to look a certain way in order for them to be happy. For example, when I ask someone what needs to happen for them to feel loved, their answer is very often a seemingly endless list of requirements that has to be met before their brains are allowed to release any good chemicals and hormones.

For example they might say: If my partner says that I’m the best they’ve ever had and when they tell me that they love me with that ”special look in their eyes”. And if they stop whatever they’re doing when I walk in the room or want to talk to them. And if it’s obvious that they can’t keep their hands off me. And if they show that they care about me enough to do things for me without me having to ask. And…

Notice that this list is usually separated by ”or” which means that if just ONE of these rules gets broken it’s enough to feel unloved or rejected. You might not have paid attention to the fact that there was slight difference when it came to the rules for feeling loved. They were separated by ”and”, meaning that it’s not time to feel loved until each and every one of these rules are fulfilled. Preferably backed up by the planets being in proper alignment with the stars, a full moon and the internal biorhythms are all at their peak.

In other words, the rules that many of us unconsciously set up for feeling loved are so complex that they are close to impossible to live with even if you know what they are. But even when we do know, to complicate things even further, we very seldom communicate them to others. The logic being that if you have to tell people what you want it doesn’t count. Not only does this add unnecessary complexity to life, these rules become a classical Catch-22 (or if you are into NLP a double bind) that makes it really hard to win. No wonder so many people walk around feeling bad more often than they feel good.

Maybe the strangest thing about this, from my point of view, is that when you ask them where they got all these rules from, they lose whatever sense of surety that they had about the rules themselves. All of sudden they become vague and say things like ”it’s just the way it is”, ”I think I might have gotten it from my mom” or ”after this ’thing’ happened anybody would have thought the same”. I don’t know if you think that this is as strange as I do, but it seems like they are willing to almost bet their lives on rules that they adopted rather casually and without any special consideration.

I hope that you see the paradox of this, because it means that they have made up a list of things that others can do to control the way they feel. Brake this rule and I have decided to automatically feel bad. Do this and I might feel good for a while. Even though they’re seldom aware of it, it turns them into victims of their circumstances, spending their lives searching for just the right places and people to somehow make them happy.

It turns them into eternal ”emotional carpeters”, trying to put their one favourite fitted carpet over the whole world so that they can avoid being hurt, disappointed or angry by stubbing their toes on even the slightest pebble. I trust that you as a reader of this understand how much simpler it is to navigate even the roughest of terrains by putting on a pair of comfortable shoes.

However, these ”mental shoes” aren’t about trading your old rules for new and improved ones. Because even if it might seem a lot easier to live by ”better” rules like ”every day above ground is a good day” or ”if I can make someone smile today I’m a success”, these rules all too soon just become the next level of carpeting. No, the most comfortable shoes of all is to realize that no matter what rules you happen to have adopted as your own they only exist in your mind. They are not real. They are made up by you.

Naturally, some of them could still be seen as useful guide lines while others are clearly complicating life for you. It’s beside the point since as soon as you see that you are born with an innate wisdom that don’t really need rules set in stone to tell the difference between what works and not. Rather, it has the freedom to let you call things as you see them and pick and choose whatever ”rule” that makes sense to you at the moment. When you trust this, you will all of a sudden no longer be emotionally dependent on your circumstances.

How can you use these ideas in useful ways? Well, first of all it’s not easy to play a game when you don’t know the rules and down right impossible when you don’t realize that the rules are made up. Still, it makes sense to drive on the left side of the road in England and on the right here in Sweden. If you don’t keep common rules like that in mind you will probably crash. On the other hand, believing that you have to get yourself stressed out about other peoples behaviour until you feel bad enough to dare to bring it up is slightly worse;-)

So, what are your current rules for life? Do they make you think that something on the outside have to change in order for you to feel good? Were they casually accepted, but vehemently defended? Does that make sense to you? Then realize that you are the one who set them up and that just because you came up with them doesn’t make them neither true nor real. That you can change them, communicate them lovingly & clearly to others so they don’t have to guess or, better yet, simply see them as figments of you imagination and choose not take them seriously. Either way, once that insight strikes your mind it will elevate your life to a whole new level… 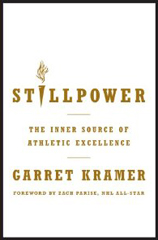 I had no idea that there were someone else coaching athletes in the much the same way as I until I read this book. Michael Neill recommended it to me and you will see why when you read it. Insights into bringing out your best self is jumping out from every page. So, it doesn’t matter if you’re an athlete, a parent, a CEO – if you’re looking for a book that really gives you insights that can change your entire outlook on life, then this is it.