Amazing how quickly times flies by. Since last time I have been to England, Austria, Dubai as well as all over Scandinavia to inspire people in this new inside out view of reality. It’s incredibly gratifying to notice how it somehow resonates with something deep inside everybody.

Not to mention how my clients solve problems that I didn’t even know they had – and all on their own. Before, I was totally convinced that some kind of expert that ”knew better” had to give the solution to people who knew less. That we all really have what it takes somewhere inside us. I find this discovery beyond the cliché incredibly hopeful.

That’s why I’m very grateful to supercoach Michael Neill for showing me the first glimpse of this. So, this month I take a look at the illusions that keep us from seeing the truth about the world we live in. I hope it can give you that same glimpse of ”something wonderful”…

Make Your Life a Masterpiece,

" The real voyage of discovery consists not in seeking new landscapes but in having new eyes. "

When I was a small boy my all consuming passion was spheres made for sports, i.e. balls of any kind. Didn’t much matter what size they were. If they displayed there natural characteristic of rolling and bouncing there was nothing more fun than chasing them around.

Still, my mother claims that she always knew I would end up somewhere within the field of psychology. She based this on my, according to her, equally wide-eyed fascination for the psychology books she had to read for her work. Apparently, I would sit and turn the pages back and forth for hours on end. To the point that they thought I was a little strange since I was only four years old.

There was one of them in particular that I could get lost in. And it was the thickest of them all – Elements of Psychology. I was a pretty early reader, but academic English was naturally eligible to me. So, it was the pictures that caught my attention. That brick of a book had a whole section devoted to perception that I found absolutely fascinating.

Lines that were of equal length but looked like one of them was longer than the other? Circles that kept moving even though they were statically printed on paper? Black dots that appeared out of nowhere when you didn’t directly look at them only to disappear as soon as you tried to focus on them? Impossible! Others looked like an old woman in one instance and like a young girl in the next. There seemingly was no end to the peculiarities.

Now, I don’t know if you share my fascination for how much we can be fooled by our very own brains, but follow me for a little while longer since these examples show us a lot about how we construct our experience of reality and thus our lives. Because these show up in everyday life as well. For example, have you ever been sitting on a train and been totally convinced that your train started moving only to realize it was the train beside yours leaving the station?

Did you notice how the world kind of swayed when you thought you were moving and how it instantly stopped once you realized you had been ”tricked”? Or have you been totally convinced that you heard somebody say something and then found out it was only you who heard it? The last one might be harder to spot since most of us would argue that the others missed it rather than agreeing that it was ”only in your head”.

My personal favorite is located in the ”Funny House” at most fairgrounds, but the one I’m thinking about specifically is at Gröna Lund in Stockholm. If you ever been to one of these you know that inside there is this little bridge enclosed by a big revolving cylinder with moving lights. When you get there it looks simple enough to cross the bridge, but as soon as walk out your brain refuses to believe that it’s the walls moving and convinces you that the bridge is moving instead.

With your eyes open the short walk becomes almost impossible to make without holding on to the rails. Close your eyes and it’s as solid as it’s always been and losing your balance seems ridiculous. If you haven’t tried it out, please do the next chance you have.

Anyway, what am I getting at here? Well, as human beings we all have a tendency to believe that we are registering the reality around us much like a camera. But the truth of the matter is that we, through our limited senses, make our best guess as to what’s going on around us. Sometimes our experience seems to correlate to the people around us and we take that as proof of that we know what’s going on. Other times we are alone in our opinion and usually we interpret that as all the others are a bit strange.

Let’s stick to the facts here. We only see light that’s between 400-700 nm (what we call visible light). We only here sound within a frequency span of 20 – 20.000 Hz. All our other senses of touch, smell, taste and balance have much the same limitations. Once we perceive something our nervous system makes it into electrical signals that reach our brain. Then we have to think about these signals and only then do we get a sense of what’s going on. In other words, we don’t experience ”reality” but rather our thoughts about ”it”.

This might all seem complicated but it’s really very simple. Because all it means is that anything you feel doesn’t come from your circumstances – it comes from your thinking. It means that there is no connection whatsoever between the outer world and how you feel. No exceptions. That’s why we react to differently to the same stimuli. One person gets burned out at work while someone else flourishes by doing the same job.

And it explains how you all of sudden can get the idea that there’s something important that you forgot and the world feels like it momentarily rocks. Nothing has really changed, but it really felt like there was something to do. If you react to those thoughts and start thinking about them in turn, you might get the same feeling of losing your bearings or grip of reality as you did in that tunnel without the bridge being any less stable.

Fortunately for us, that sinking feeling in your stomach is not trying to trip you up. It’s trying to tell you that you’ve fallen for the illusion. That you can ”close your eyes” to those thoughts that you’re currently taking so seriously. That you can confidently disregard those insecure thoughts as nothing but a mirage. And as soon as you do you will be back on solid footing and mental balance.

Because behind all those seemingly real illusions it turns out that your mental bridge is as stable as it’s always been. On it you naturally find that wonderful sense of being fully present in the moment. Of being in contact with the force that keeps you alive. You know this from the feeling you have when you take your first steps with regained balance. And from that sense of balance, ease and well-being there isn’t anything you won’t do even better… 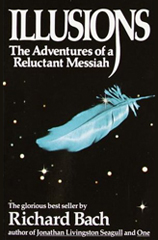 This is first book I ever read in the personal development genre. Instantly got caught up in the story of how malleable our reality is. The idea that we kind of paint our experience from the inside rather than having our experienced molded by what’s going on on the outside is just fascinating. And, that we all come pre-installed with everything we need to have a good life is endlessly hopeful to me. This months thoughts got me inspired to read it again. Hopefully, they will do the same for you…