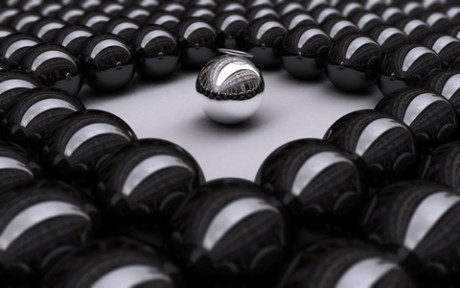 What is going on in Paris still overshadows most things right now. We all want to live in a free and open society, even though the price for doing so feels pretty steep in times like these. Right after the news broke I sent out a tweet with some quotes by Napoleon. I include them here as well as I find them relevant still:

”A true man hates no one.”
”All religions are made by man.”
”A leader is a dealer of hope.”

Let us all be leaders at whatever levels we happen to find ourselves. Dealers of hope refusing to have our hearts blackened by hitting back with an ”eye for an eye” mentality. Let us be bigger than that.

This months coaching letter is about something we all fight against. Something that every human being in history has fought with. With a little understanding our generation could be the first to break the cycle. I find that hopeful. Hope you do too …

Your Life is a Masterpiece, discover it!

The Angel or the Devil?

Is it possible for someone who loves you or really likes you to suddenly appear to have a change of personality and, without warning, say or do something that hurts you? Ever done it yourself to someone you care about? This is probably some of the most frustrating and, for me, most fascinating aspects of being human. No wonder some of the greatest thinkers in history has pondered this paradox over and over.

The examples for this in literature are therefore plentiful. Like having an angel whispering in your ear on one shoulder and a little devil on the other. The villain Two-Face in Batman. Or the story of the good doctor Jekyll who by drinking an elixir that bring forth his ”primitive core” transforms into the evil Mr. Hyde. History is filled with these tales of dualistic metaphors to describe human nature.

But, to be honest, we don’t need to look outside of ourselves to find inspiration for similar stories. We fool around with our kids and just looking at them warms our hearts. A few seconds later we suddenly have to stop ourselves from not screaming at them in frustration, having anything but love in our hearts. Or, we go to bed at night feeling on top of the moon and wake up in the morning with a knot of anxiety in the pit of our stomach that makes it hard to get out of bed, much less go to work or even show our face outside the door. 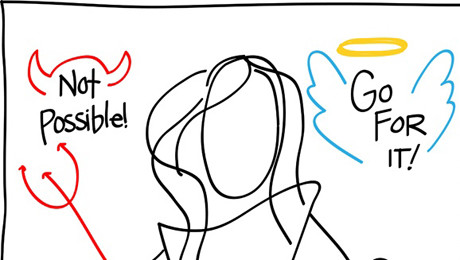 My guess is that you, at least in some way, recognize yourself in this human dilemma. Might even had your own run-in with  frustration about it. So what is going on? Are we all prone to having split personalities or to suffer from bipolar disorder? Well, though it might really seem that way sometimes, the answer is much simple than you think. All that’s happening is that we all go up and down in our mood depending on the amount of thinking we take seriously. If we have enough thinking in the way we can even loose our mental clarity, balance and perspective completely. As soon as that happens our personal version of Mr Hyde shows up.

Moments later, or at least in a day or two, our minds naturally clear and we pop back in our nice and normal Dr. Jekyll mode. Seemingly in a puff of magic everything around us looks better again, our hopefulness returns and we can’t believe made such a fuzz over ”little things”. Going back to doing the best we can with whatever happens to be in front of us in the moment is a virtual no-brainer.

It’s so natural and effortless that our intellect has a hard time accepting it. We seem to crave a more complex explanation as to why our lives look the way they do. Hence, we put our analytical hats on and really apply ourselves to finding what went wrong, in the hope that we can avoid it happening again in the future. As we do that, our moods go down again as we now get blinded by our analytical thinking instead.

This is why it is elusive for us to see that the world looks bad to us just because we are in a bad mood. It’s all too easy to think that of course I am in a bad mood when everything in my world looks so bad. The only thing that can help you handle this with some compassion and grace is understanding what is going on. That ”uncomfortable” feelings are only signaling that your mood has gone down and are not telling you anything about the state of anything ”out there” in the world.

Because our moods are more like internal weather systems made up thought storms and thought clouds shifting through our consciousness. And we are worse at predicting them than the Weather Channel. Nobody knows what mood they are going to wake up in tomorrow or even what it’s going to be like in fifteen minutes. But when you understand that you find that you can put on some ”insight Gore-Tex” and keep playing in even the worst of mental downpours. That it’s possible to do your best regardless of being nervous, scared, grouchy or indolent. That uncomfortable feelings are nothing to be afraid of and the thought storm that caused them will blow over soon enough.

With that understanding it is almost weird, or maybe not so weird, how seldom you are as nervous or afraid. Dr. Jekyll, the angel, the good side or whatever you want to call the true nature of yourself, gets free reign and saying yes to being nice is no longer optional but simple common sense. Saying no to doing dumb and violent things so much easier. Living once again looks as good as it actually is. To understand this is what I call having a truly useful guardian angel on your shoulder … 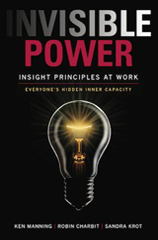 This is the best leadership book that I have read so far. Because instead of giving you models for behavior, the authors take a look at the guiding principles for human psychology that affects everything behind the scenes. Mixed with practical examples on how to turn a negative trend around, make people that don’t like each other see eye to eye and work effortlessly together and finding the right space to find solutions to any challenge you face. In short, all you need for running both a successful business and a satisfying life.